A compact yet highly effective navigation accessory to accompany you on all of your adventures, night or day. The Nav Bead can be worn around the neck, with a simple and rugged design that’s perfect for those who appreciate outdoor gear with form and function.

Also includes a bright photoluminescent lamp for map illumination and personal marking at night. The ‘pace counting beads’ allow you to record distance travelled. These are features not seen on other small compasses.

An ultra-reliable back-up to other navigation devices such as GPS, which could fail to work due to flat batteries, extreme conditions or damage. The Nav Bead is fully waterproof, with a very durable construction.

The Nav Bead packs a lot of features into a very compact design which is almost unnoticeable when carried.

Very accurate for its size, the 20mm diameter compass was specially designed for the Nav Bead and is a far cry from many other ‘button’ compasses available.
It is tough, shockproof and built to GSA-compliant specifications. The compass will function in temperatures of -30°c to +50°c and pressures of vacuum to 9atm and 80m depth.

Equally capable of both day and night navigation thanks to the very best in photoluminescent GITD (glow-in-the-dark) materials. The compass and direction line are easily readable in the dark, and just a few seconds of light from a flashlight will ‘recharge’ them. The 20mm GITD lamp provides gentle illumination for map reading at night, which will preserve your night-adapted vision, unlike the glare when using a flashlight. When worn around the neck, the GITD lamp acts as a highly visible personal marker, ideal for showing your position to others on a night trek.

Included are 14 ‘pace counting beads’ also known as ‘ranger beads’.
These facilitate a simple military technique of recording distance travelled along a route, by counting your paces and sliding the beads to record every 100m and kilometer travelled. The Nav Bead in this ‘pace counter mode’ can be tied with a wrist loop or easily attached to a rucksack or jacket.

Another feature the Nav Bead packs in is the cord itself, which can be used for map work. For example: to measure curved and straight distances on the map, or to find headings or locations on the map. The cord can also be held out to form a ‘sighting line’ when taking a bearing to obtain more accuracy.

The whole Nav Bead is extremely durable with an oil and seawater-resistant construction.

The Nav Bead comes in a plastic storage case and includes an instruction sheet detailing the uses of the Nav Bead for basic navigation and map work. 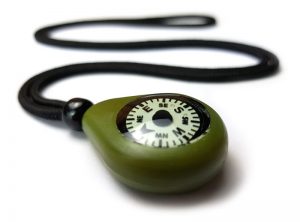